The Three Investigators and the Wonderful Lego Projects 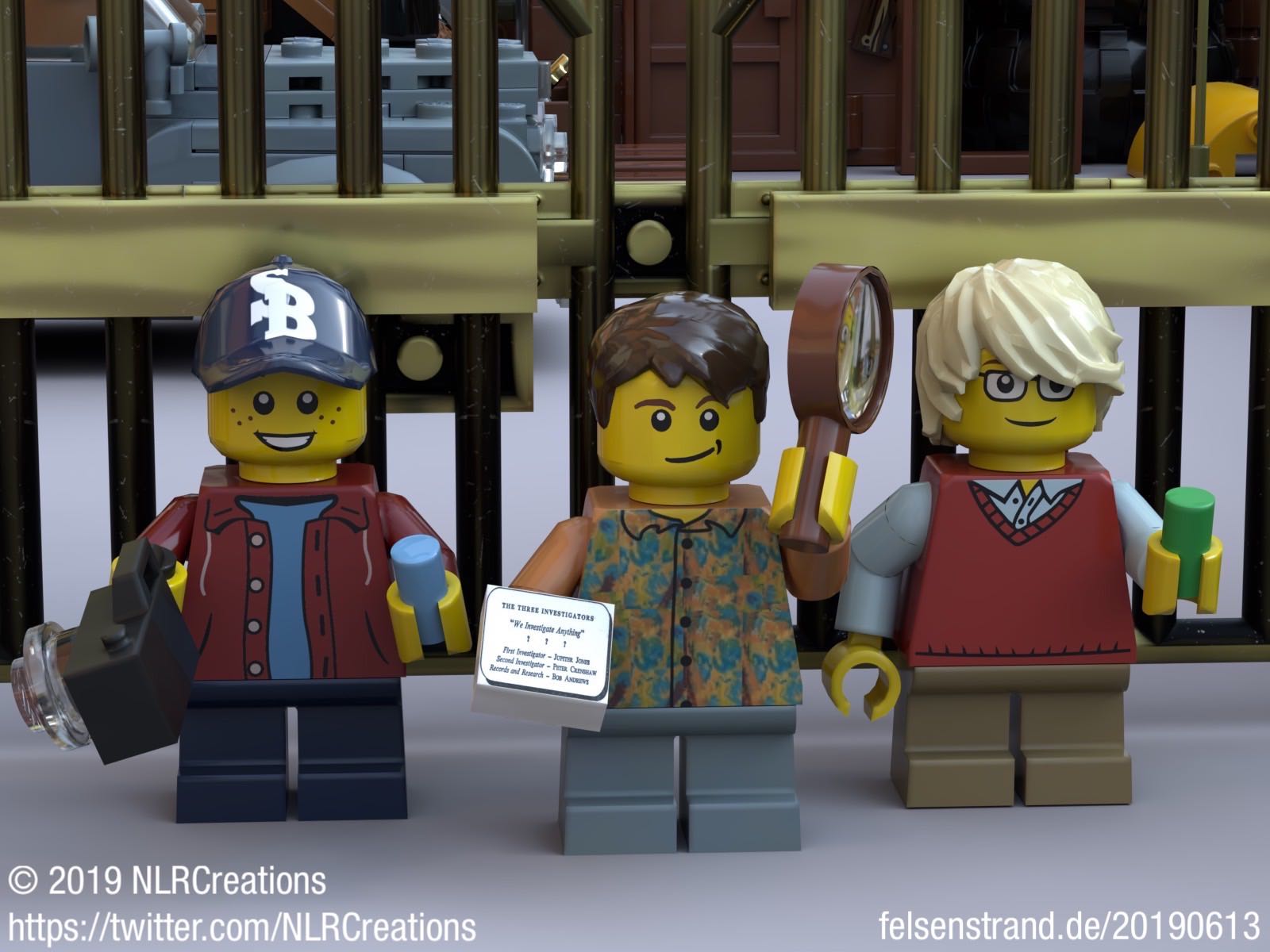 Some day browsing Twitter I saw posts from a Profile called NLRCreations showing the salvage yard – built with Lego! Those pictures belonged to a project on Lego Ideas.

Some days later I saw pictures from another project on that profile – the Whispering Mummy.

I wondered about the origin of these projects and who built them, so I asked the people behind the Twitter profile if they were interested in an interview.

They were. NLR Creations are in fact a father and son team of Lego enthusiasts, otherwise known as Phil and his son, Noah.

We mailed back and forth and whilst doing this I received an astonishing set of pictures which I scattered through this interview.

“Lego Ideas” is an official platform where everyone can submit ideas for Lego sets. After a free signup one can vote for a project and support it. When an idea has reached 10 000 supporters Lego will check if they make a real Lego set of the idea.

Hopefully this interview boosts those Lego Ideas projects so we can buy these Lego sets some time in the future!

Phil, are you and your son Noah both fans of the series?

I have been a fan since my childhood. My older brother had a few of the books that I must have read aged 9 or 10 and then I would get others from the local library. I think that the first one I read was “sinister scarecrow” and I remember loving the cover – this one!

A few years ago I started reading them to Noah as bedtime stories and we read the first 12 or so together. He has since been reading some of the others by himself.

So yes we are both fans now.

Which cases are your favourites and why?

I think we both have a preference for the Robert Arthur ones, maybe because these are the ones we read together first but also because they are a great introduction to the series and also to children's mystery fiction in general.

I think that Arthur does a great job of building the stories and developing the details of the mystery as the book progresses.

I remember that my son never wanted me to stop reading because of his classic “cliffhanger” chapter endings that I think helped set a tone for the whole series!

Very interesting … I never looked at the cliffhangers this way. I guess I just took them for granted as “the way” to write these stories.

Do you happen to know any other books of that era that are maybe written in another way?

Good point for the cliffhanger endings. Maybe it is a very general way of writing this type of fiction or for that period (of the 1960s). I can't say that I read a lot of other equivalent series books at the time, I never really got into Hardy Boys or the Famous Five/Secret Seven books etc. in the same way as I did with Jupe, Pete and Bob!

Those cliffhanger endings did make my son want me to keep reading though, so I guess they did achieve their purpose!

The series is big in Germany (the 200th case was published in 2018). Is the series still famous where you live (England or France or both)?

No, the series has largely been forgotten in England and France and I believe even in the States, although thanks to Facebook and Twitter we have found a lot of nostalgic adult fans who remember the series fondly from their childhoods – usually the great book covers, the Rolls-Royce and especially the secret trailer HQ and secret entrances from the junkyard.

We had hoped that Lego sets of the series might help it become known to a new generation – imagine having the corresponding book with each set!

How did the idea of building LEGO sets for T3I scenes came into existence? Was this the plan from the start or did it evolve?

My son is a huge fan of Lego and for the moment his wish is to work for Lego as a designer when he is older. When we started reading the books together we had spoken about that it could be fun to make a Lego set from the series and the idea just came from that.

Afterwards we discovered the software to build Lego ideas virtually and then the Lego Ideas site – where people can submit their ideas for new sets and if they reach 10000 supporters in around 18 months, they move onto a “decision” phase where Lego may then decide to produce them as real, available sets!

We decided to go for it and design a “salvage yard” set and then submit it to Lego Ideas. It took us around 6 months to make the design (working on and off together on the weekend or holidays) and we submitted it last August.

We had some great feedback and enthusiasm from fans – especially it seems from German fans, where you are lucky that the series is still so popular – and we reached a few hundred supporters quite quickly, however since then it has been difficult to get more supporters. This is a problem in general with the Lego Ideas site – that is aimed at adults – especially for “niche” or for original ideas.

The Salvage Yard idea currently has around 400 supporters, which we are of course crazily happy about already, but our next big objective is to reach 1000 supporters before the summer. This would then give us an extra 6 months to try and reach the final goal of 10000 supporters! Fingers crossed!

Afterwards we submitted the “Whispering Mummy” set idea and also a “Stuttering Parrot” board game idea but this last idea was less successful. The board game idea has now expired on Lego ideas – it didn't reach 100 supporters - but details can still be found. Who knows, if enough people express interest after your interview then we may submit it again!

Whilst making these later designs we changed software (and also became better at using it!). The latest designs have photo quality pictures where they now actually look like real Lego sets! For example, we recently published a new design for the salvage yard set.

You said it took 6 month for a first design. What was the biggest problem that took you so long to finish it?

The main problem with designing the first set was finding the time. I said 6 months but we would do an hour or so most weekends, trying different design features etc. We rebuilt the trailer 3 times, each time to make it larger and then also again to add the secret entrances and periscope!

I don't know how long it actually took in terms of hours. The software we use are LEGO Digital Designer from Lego itself (although I think it is no longer supported) and now BrickLink Studio although others exist.

I'd suspect it would be rather hard to leave out some details so eventually you would design something that could actually be built.

Yes, our current yard idea is probably too big for an actual Lego set and a final product designed by the Lego Group would probably look very different! The Lego Ideas submissions are proposals and fan made prototypes. We just kept adding more and more details from the series – the Rolls, the secret entrances, Jupe's workshop, the characters, the chalk marks, etc. – and then didn't want to leave anything out!

Are there any plans for more Lego projects and if so, which ones?

Yes there are, although finding time to work on them is difficult! 😉

The salvage yard set is now finished and we are pretty happy with the final designs, of the yard and also of the characters and their minifigures, especially now Jupiter's wonderful and iconic shirts!

We are also working on a “Stuttering Parrot” set – similar to the “Mummy” set and a larger, more detailed “Terror Castle” idea, but that might take some time to finish!

Someone on twitter suggested making a “Villa Körting” set and the building looks great with some great interesting detail, so we will also look into that soon!

Other than that we also have an original Dickens’ “A Christmas Carol” carousel decoration idea that is currently on Lego Ideas. Additionally we have been working on a travelling circus idea.

I wish you both all the best for those projects and hope there are many more to come. Thanks for the interview, Phil & Noah!

I interviewed Phil & Noah in June 2019. By the time you're reading this the LEGO projects will certainly have evolved:

And please don't forget to support these projects if you want to actually buy these Lego sets in the future!

Since the main language of this site is German you might be interested in the German translation of this interview as well.